Joseph Szabo is an American photographer and teacher. Among other works he is most notable for his photographs of American youth. He has been photographing his teen-age students. His black and white images have won him worldwide admiration, from famous photographers and also from filmmakers like Cameron Crowe and Sofia Coppola.

Dawn in Her Room, 1985 – This was the first photography by Szabo I saw a few years ago

“Joseph Szabo knows this well: nothing lasts for ever, except high school.”

Since the first time I saw a photography by Szabo on the Internet it just took me a few seconds to started to looking for more. I knew I had to know more about the artist. 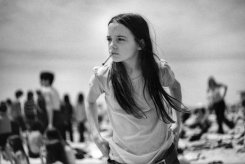 I completely fell in love for those intense stories told only through two colours. Black and white were more than enough to became a fan of this great photographer.

“Most of the students had no interest or excitement for high school, and I was finding it really difficult to work there.”

It is possible to find the complete photography collections in his books:

Lifeguard documents the photographer’s encounters and friendships with the Jones Beach lifeguards in the photographs taken between 1990 and 2015.

In the mid 1970’s two of my high school students approached me and asked if I would like to see a Rolling Stones Concert. They had the tickets and needed a friend with a car who would drive from Long Island to Pennsylvania.

Beginning in the early 1970’s, Joseph Szabo started capturing the melting pot of humanity on Jones Beach, one of the busiest beaches in the world with more than six million visitors a year.

A collection of photographs that begins with Almost Grown and adds new work never before seen from the 70s and 80s.

A time of innocence and bursting sexuality, of tenderness and raucousness. Almost Grown celebrates in photographs and poetry the joys and uncertainties of that paradoxical time when we are no longer children and yet are not quite adults.