Colorful movies full of details are a half way to consider them beautiful movies.

[Beautiful – wonderful; very pleasing or satisfying. Having beauty; possessing qualities that give great pleasure or satisfaction to see, hear, think about, etc.; delighting the senses or mind.]

There is above the description of my favorite word. It looks like an aside, but there is a connection between it and what this movie means to me.

I think it is not necessary to refer that Le fabuleux destin d’Amélie Poulain is one of my favorite movies since I was a kind and I wasn’t able to understand it. The strong colours and the genial sequences already attracted me in an inexplicable way.

This is a very long post with a deep analysis about some scenes. This is mostly directed to people who love this movie like I do in an addicted way – of course everyone can read and love it too.

This movie from 2001 is directed by Jean-Pierre Jeunet. Audrey Tautou performs the main character and she performed very well the sweet Amelie Poulain.

The amazing soundtrack belongs to Yann Tiersen – whom I started to admire because of his songs in this movie, which are very special, and fit extremely well in each scene. Mentally and secretly I watch again those scenes every time I am listening to this soundtrack. Then I start flying in the moment. I love doing it while I am biking or while I am walking around downtown. These are inspiring songs for several moments.

This is a movie to watch and to watch again. I always discover new delicious details, which make me to do frenetically rewind along the story. There are wonderful details and I thought that this is the right moment to share this deep analysis about them. It is important to refer that this post is about my favorite details and scenes, so it is not about all the movie in general – sometimes the post doesn’t follow the real order of the events in the movie. This is focused on the main character – Amelie.

I am sure that there are small pleasures in this movie. I guess a lot of people tend to identify them in something they appreciate too. This movie reveals that I feel good when thinking about the pleasure of doing or enjoying little things.

Unconsciously I feel empathy for Amelie. Along the movie there are funny details and almost every story can be told by topics and sequences – these facts transmit me a sense of organization and facility in order to understand better the movie, with more fun.

In the beginning of the movie we are introduced to young Amelie Poulain. We can see the evolution of the character which is an adventure.

Amelie has a very special taste for little things:

Amelie’s father – Raphaël Poulain, an ex-army doctor who works at a Spa.

[His likes and dislikes on the image below]

[Her likes and dislikes on the image below] 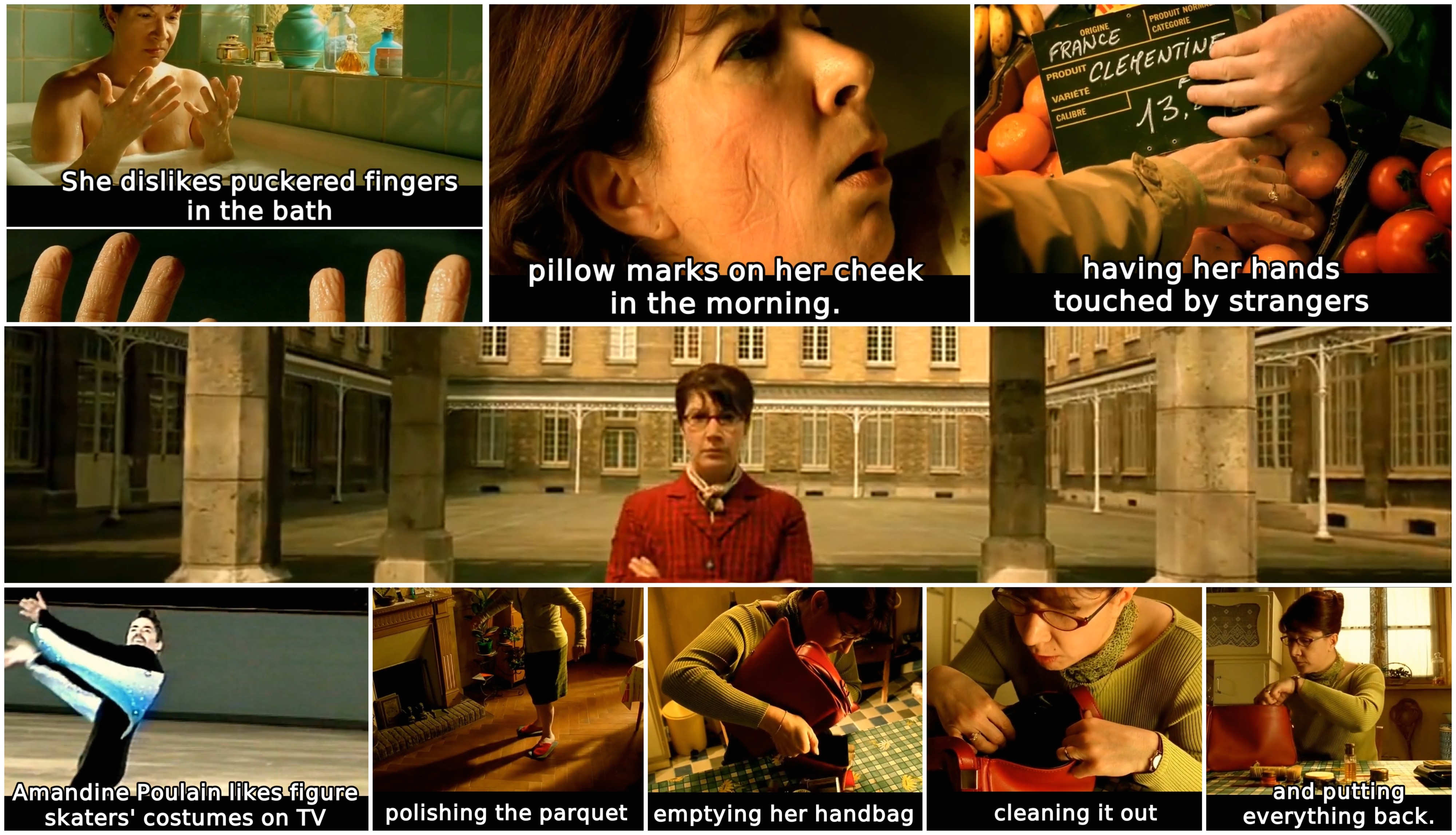 Amelie had a friend, an orange fish called Blubber who was always trying to kill himself. He jumped from the little tank and stayed under furniture where it was almost impossible to rescue him. Amelie got very angry every time it happened – she yelled so loud that her mother couldn’t handle it. It was decided that the fish would be thrown to the river. The little girl got very sad.

To compensate her loss, her mother offered her an old camera. She dreamed and she imagined animals instead of clouds while she was taking pictures.

One day she and her mother went to the church to pray for a new baby brother. When they were leaving the building, her mother was suddenly hit from above – by someone who was committing suicide from the roof of the church.

After loosing her mother, Amelie became very sad and stopped playing with her teddy bear. All she wanted was to have enough money to leave her house.

Introducing  adult Amélie and her peculiarities.[Video by Miramax]

When a single moment changes your life forever 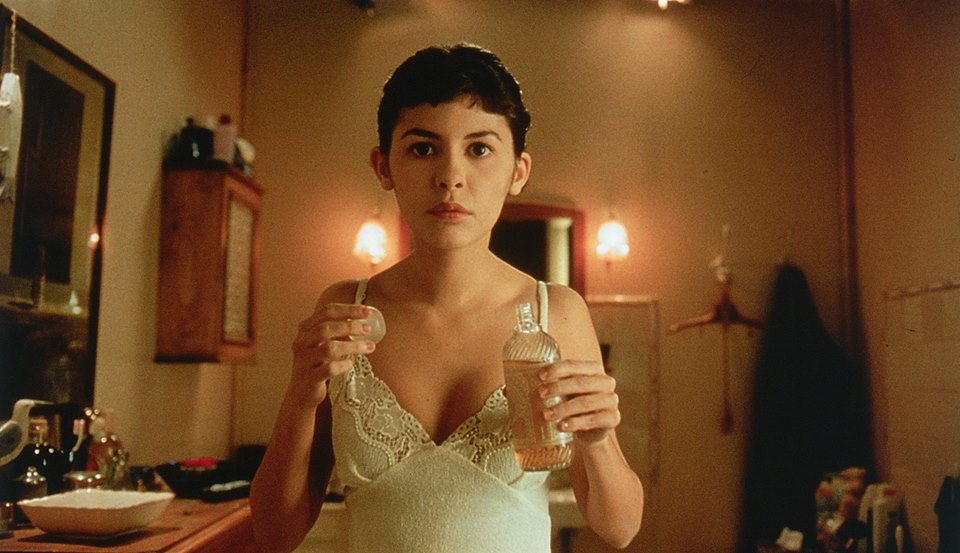 While Amelie took care of her beauty routine at night, she heard someone on the television news talking about the death of Princess Diana during a car accident. She got too nervous and the lid of a perfume she was holding on her hands fell to the floor. The lid rolled rolled rolled on the floor until it hit on a tile. Paaam! She took the tile away and behind it she discovered a hidden old box. A boy who lived in the house before, left that box there 40 years ago.

On 31st August at 4a.m, Amelie had the idea of finding the box owner no matter how or where. If she succeeded she would become a good person and kind to the others. She tried to fix the world in a very funny way.

After she decided to find the owner of the box, she first looked for the person that had lived in that house 40 years ago. She asked to all her neighbors including the rude Mr Collignon – the owner of the grocery shop next door. He was always humiliating his employee – Lucien – whom Amelie likes because he is a peculiar person.

Mr Collignon told her that his mother has an elephant memory so he was sure that she would know what Amelie wanted.

On the scene where Amelie went to the house of Collignon’s mother, a peculiar story happened – her husband who is senile was always treated like a senile person. Before he retired, he used to work in metro station punching tickets. So, because he is senile he wakes up during the night to punch holes in his wife’s laurels with his old machine. Amelie thought he was funny and told him that she had addictions too. 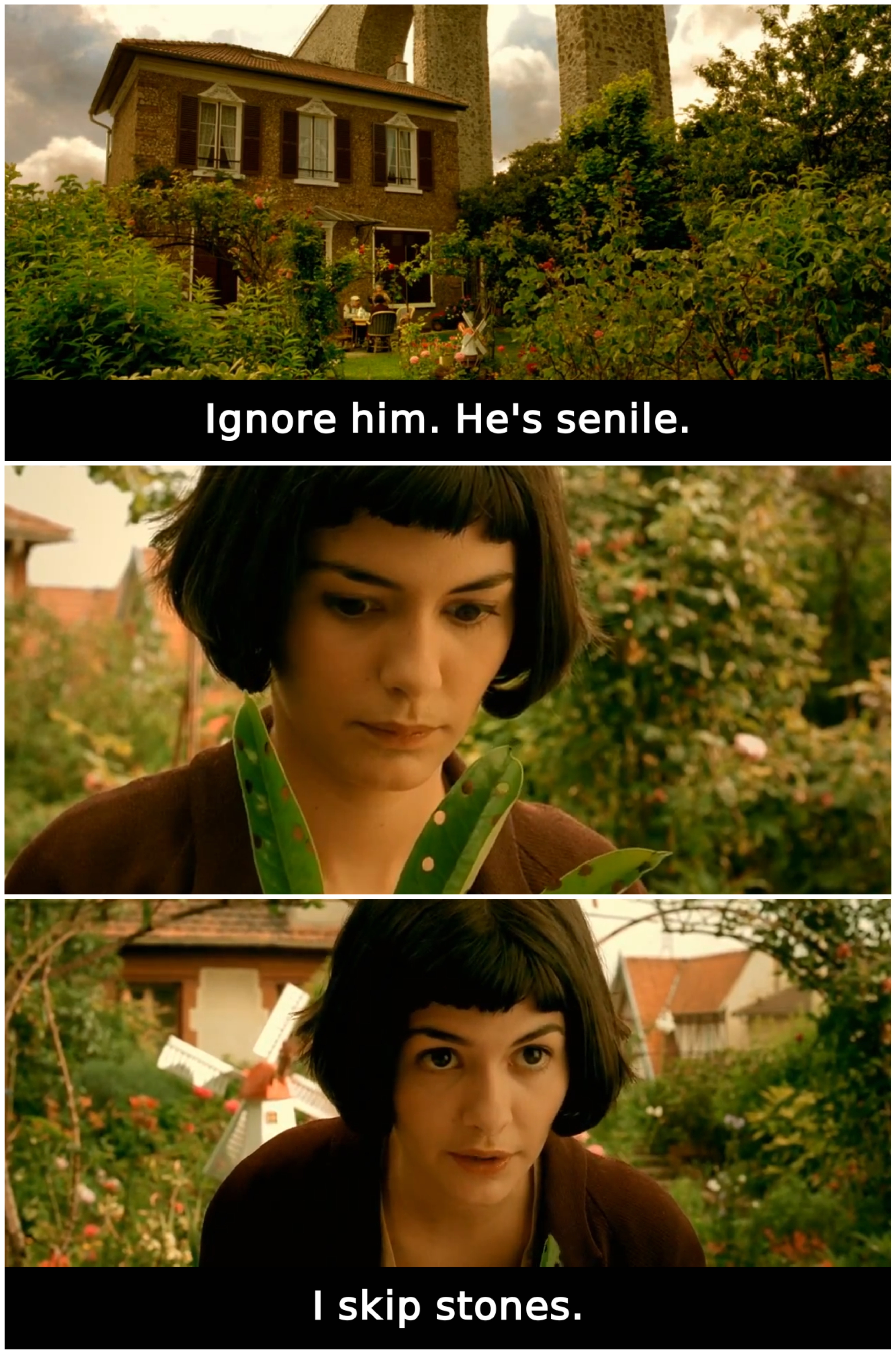 In the café she works – 2 Moulins – Amélie playing a matchmaker, purposefully spills coffee on Georgette, giving her an excuse to bump into Joseph for a rambunctious exchange. She notices little details during the sex scene.

Her father rescued an old garden gnome which her mother hated and kept in the attic. He restored the gnome and put it next to her mother ashes in the garden – her father said it was to reunite them.

Amelie’s father had the dream of travelling but he didn’t do it since her mother died, because he wanted to travel with her.

One night, Amelie did a prank and stole the gnome from the garden. She took it to a photography shop to manipulate pictures with the gnome in different places.

She started to send letters to her father with the pictures of the gnome inside – pretending the gnome was travelling alone around the world. This was intending to make him confuse and with the desire to travel. 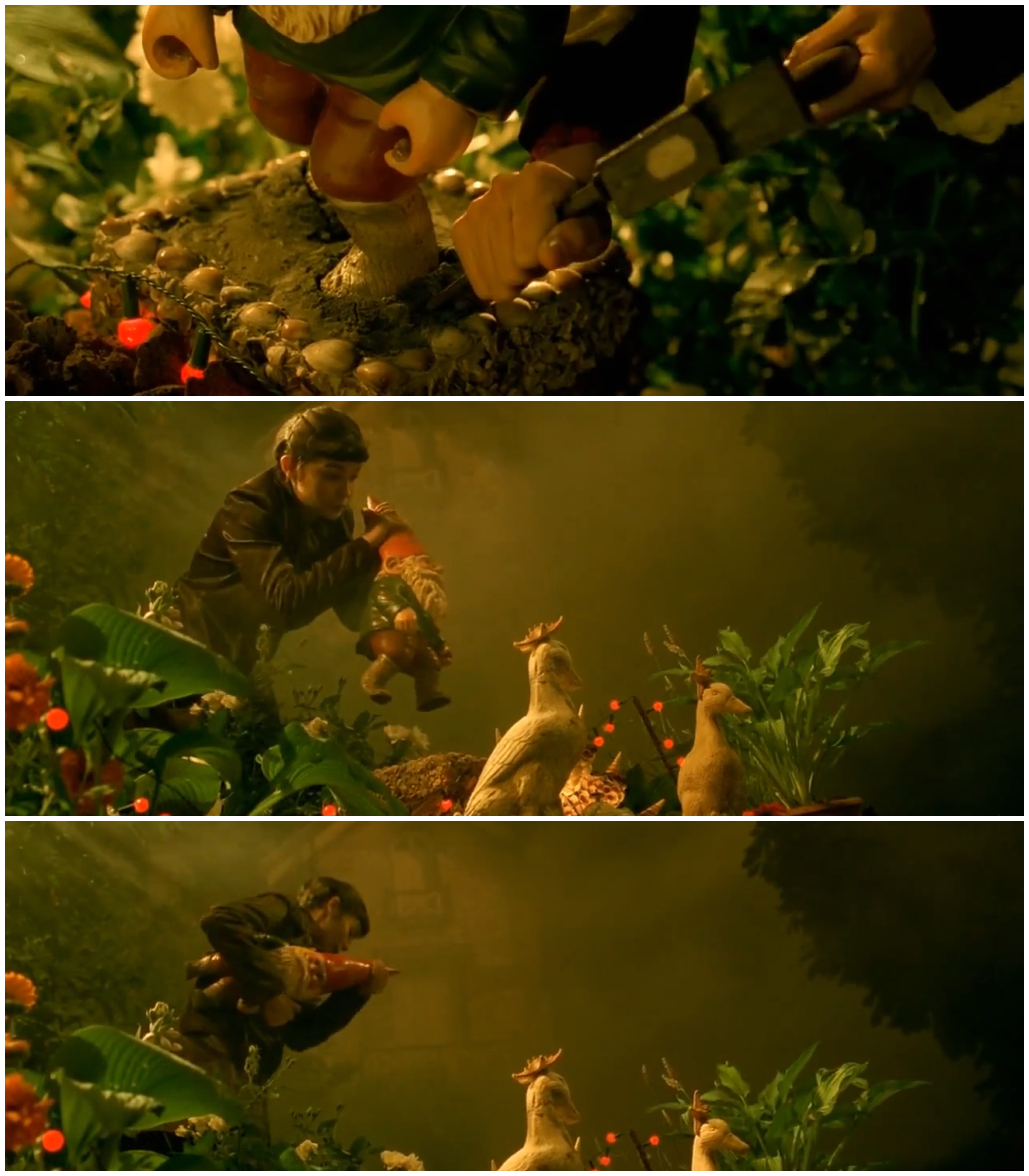 Her father ends to make a collection of the pictures of the gnome and later Amelie got what they wanted – he ends to travel alone.

The keys and pranks

During a moment Amelie was leaving her apartment, she remarks that her neighbor Collingn forgot his keys outside the door. She wants to do the right thing and return Collignon’s keys, but his rude behavior makes her think otherwise and the revenge begins because he needs to learn a lesson.

After the rude reaction of Collignon, Amelie decided to make a copy of his key and she made some funny pranks. 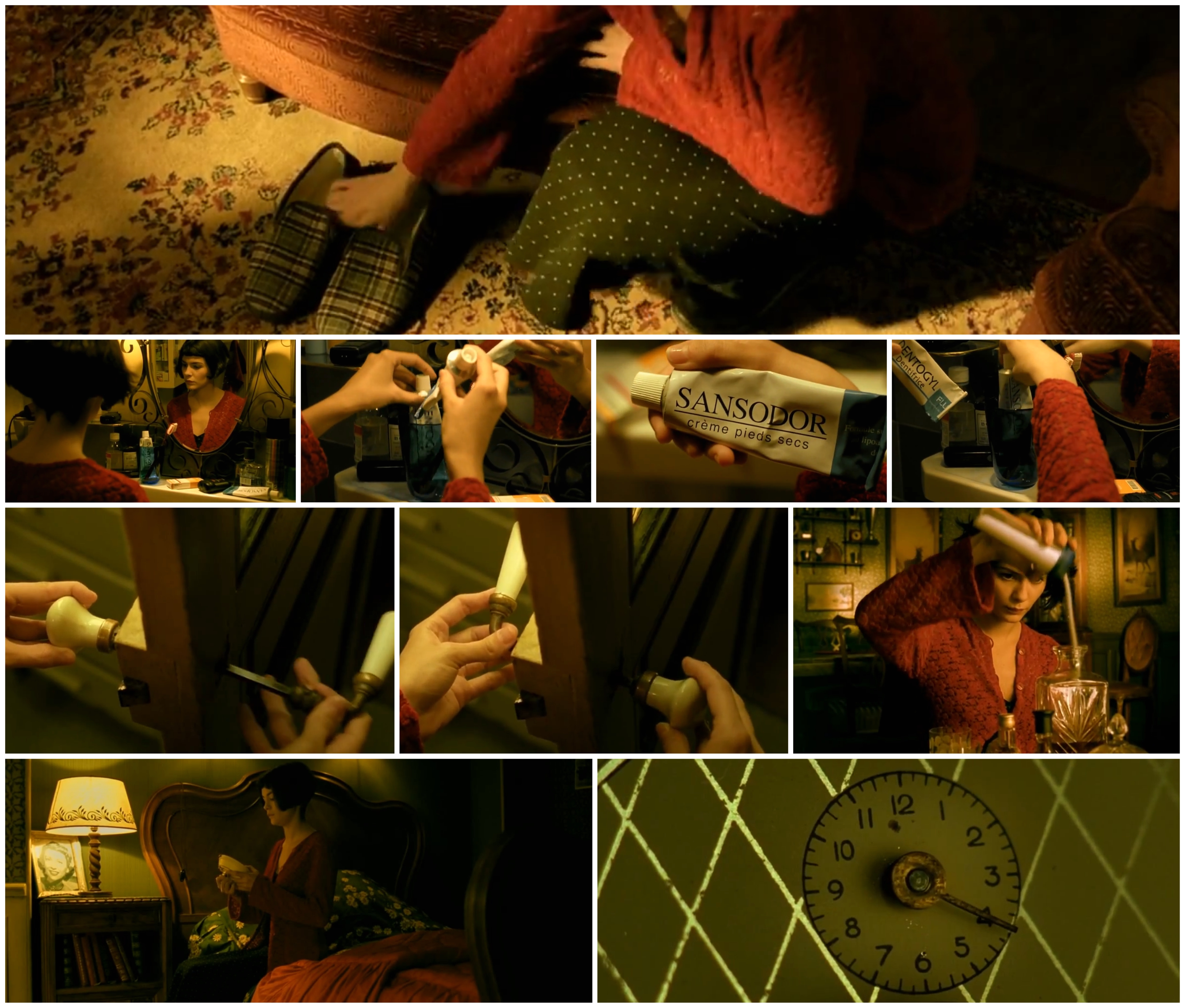 “At least you’ll never be a vegetable – even artichokes have hearts.”

Because Mr Collignon was always being rude to Lucien, Amelie told him: “At least you’ll never be a vegetable – even artichokes have hearts”

When Amélie finally returns the box to the owner, she does it in a subtle way. Discreetly she is delighted with the happiness of someone who recovers an old treasure.

Amélie, overcome with a feeling of kindheartedness, help to guide a blind man to cross the street. She describes him some things happening trough the way they are passing. This is a very beautiful scene.